When he emerged the other day and informed the media with Ranieriesque humour that he was more concerned about the welfare of Scottish swans than the threat posed by a resurgent Manchester United, there was a collective scratching of heads amongst the Gate 17 massive. Had the Special One lost the plot?

The shortness of breath provoked by his team selection for the West Ham match had me wishing an oxygen mask would drop down from the roof of the Mathew Harding Stand. What no wide men?

In the end it was easy, a procession. What next then? In which guise will the Drog turn up for our Easter fixtures? As the dominant muscular marauder, or Bambi on ice? Whoever he chooses, what matters the most is that our players play with the same degree of pride and passion they exhibited on Sunday, if all of them can stay on the pitch for 90 minutes imagine what we could achieve then. Last season Jose Mourinho billed himself as the Special One and perspicaciously managed to live up his lofty claim, delivering us not only the hallowed Premiership title but the League Cup as well.

Criticism of his tactics was rare in the media, and unheard of amongst supporters.

That was then, and this is now. Buoyed by an arrogance that comes with success and with unabashed youthful exuberance, Team Chelsea came out of the starting blocks this season like an Olympic sprinter fortified by some hitherto unknown and undetectable performance-enhancing chemical. The Premiership finishing line was as good as crossed by Christmas, with the likes of Arsenal and Manchester United seemingly in disarray. The huge sigh of relief that will follow the deafening roar at the final whistle on Saturday when Chelsea retain the title by avoiding defeat against a worryingly resurgent United will be almost palpable.

As we eventually make our way out of the stadium and into our drinkers, the celebratory singing of songs will all but banish the painful memory of the Liverpool defeat a week earlier … fingers crossed. This action might not be possible to undo.


Are you sure you want to continue? Upload Sign In Join.

Chelsea Chronicles volume one by Mark Worrall. Summary From the glory of the back to back title under Mourinho, through the ridiculous reigns of Grant and Scolari, and ending with the FA Cup victory with Hiddink at the helm, Chelsea Chronicles volume one provides the reader with an articulate and hugely entertaining insight into True Blue life. Vlad inclined his head. Six months ago, that sentence never would have left his lips.

Six months ago, Anna had been alive and not tied to the night like Vlad. And nothing had been the same since. He made it as far as the sidewalk before abandoning all pretenses and sinking down on a nearby bench. It was only second nature to blend in with the night so the occupants of the carriage that swept into the park did not notice him at all. Go home. For a moment, Vlad could only stare at him, his mouth agape at his words, his mind more shocked than angry—at least for now.

Perhaps in addition to his hip, he was also losing his hearing. That would just be the icing on the cake. 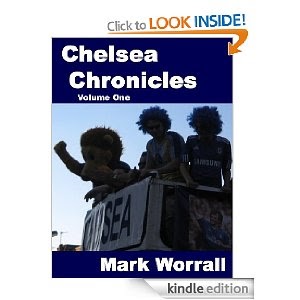 After all, no other vampire had survived a silver wound. From Stamford Bridge to Selhurst Park, with schadenfreud aplenty, relive the white-knuckle rollercoaster ride that is the season. The highs and the lows, the laughter and the tears The Black Cat mysteries, Moyes and Mata, the lunacy of Lukaku, gunning down the Gunners, choking the cockerels, that Stevie G slip, and the all-embracing empty feeling of what might have been.

All of this, and plenty more, can be found in the pages of Chelsea Chronicles Volume Four. This action might not be possible to undo.

Are you sure you want to continue? Upload Sign In Join. Save For Later.